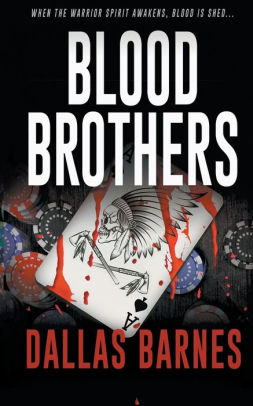 WARPAINT IN THE CORRIDORS OF POWER In a high-end hotel near the White House, three Mojave Indians sit in silence, cross-legged and bare chested. The two leather-faced elders and the young buck with a ponytail were all big men. Spread on the floor around them was an assortment of colorful modern cosmetics. Powdered charcoal, red clay, and cactus blossoms had been replaced, but the finger-traced swaths of color on red skin still looked ominous. There hadn't been an Indian attack in the United States since the early 1900s. In fifty-three minutes, that would no longer be true. When the three unarmed Native American warriors breach the fence around the White House, FBI agent John Fox was going to be drawn into a deadly war between the United States and a tribe of Indians with a blood stained hundred-year-old treaty—This time there would be no surrender. “The idea of full dress in preparation for a battle comes not from a belief that it will add to the fighting ability. The preparation is for death, in case death should be the result of the conflict. Every Indian wants to look his best when he goes to meet the great Spirit.” – Wooden Leg—Cheyenne
Reviews from Goodreads.com