Blind to the Bones — Stephen Booth 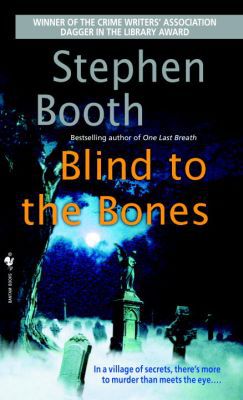 Something sinister is happening on the desolate moors of England's Peak District. The villagers of Withens are dying. Nineteen-year-old Emma Renshaw disappeared two years ago. Her body has never been found, and her parents still cling to the hope that she may be alive.

Now, Neil Granger, one of Emma's former housemates, has been killed in a particularly grotesque way. What was Neil doing out on the moor by the deserted, rat-filled railway tunnel where his bludgeoned remains were discovered? Is there a link between Neil's death and Emma's disappearance? Why didn't Neil offer Emma a ride to the station on the day she vanished? Or did he? Had he been hiding the truth? And what is the significance of Emma's bloodied cellular phone?

While Detective Sergeant Diane Fry focuses on Emma's possible murder -- now a cold case -- her colleague Ben Cooper takes a temporary assignment to probe rural crime. His first task is to investigate a series of burglaries in and around Withens. Thieves have hit nearly every house that has valuables, and even the church has been plundered. Only one family seems to be exempt from the break-ins: the Oxleys. Descended from the workmen who built the tunnels that run two hundred feet below the village, they stick to their own like the sheep on the hillsides, passing on secret knowledge through the generations.

Into the tempest that is Withens come Cooper and Fry, two people who share an emotion-filled professional and personal history, and who must again deal with each other as their separate cases gradually converge. But winning the trust of the locals and establishing a link between the deaths is not their only challenge. What other secrets does the village hold? And even if Cooper and Fry can find the answers, can the guilty ever be brought to justice?
Reviews from Goodreads.com