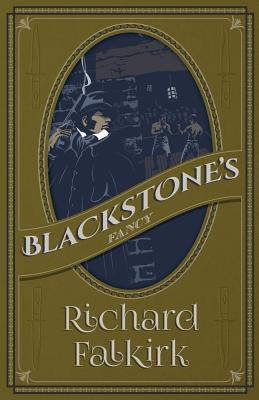 Share:
“A superior example of a period piece as a whodunit… a gripping yarn.”
Cambridge Evening News

“London's slums and underworld in the 1820s are a desperate and colourful background. Richard Falkirk has his teeth firmly into his period, and those who like their history brought to life with the vigour, violence and the degradation of London in the 1820s will enjoy his latest book.”
Worcester Evening News

“Crisp, fast-moving stuff, with a strong sense of period.”
Homes and Gardens

“A welcome return.”
The Guardian

“The detection in Blackstone's Fancy is secondary to Falkirk's pictures of crime, prizefighting and the law (such as it was) 150 years ago. Good entertainment.”
Oxford Times

“Another of those excellently researched and written adventures of Edmund Blackstone, Bow Street Runner.”
Morning Telegraph

“A well written and ably constructed thriller set in the 1820s. The period background of the novel is very well realised and the characters are skilfully drawn, while the ingenious plot keeps the reader on tenterhooks.”
Border Telegraph

“Edmund Blackstone is a handsome, sexy, splendidly invented throwback to the 1820s hero-detective. A third book is planned, which is quite something to look forward to.”
She magazine

“An entertaining and informative pictures of the times. Blackstone is a welcome addition to the ranks for those who prefer to absorb, rather than be taught, their history.”
Book Addict

“It is a second adventure in the exploits of Blackstone, the Bow Street Runner, and even better than the first. The early nineteenth-century atmosphere has been admirably caught by an author whose confident use of the slang of the period gives the story vitality.”
Scarborough Evening News

“Blackstone is a man to remember, a lawman with a style of his own… The author has clearly done his homework.”
Belfast Telegraph

“Readers will enjoy the adventures of Blackstone.”
Eastern Daily Press

“Blackstone, a runner of renown and partial to the joys of the ring, is the creation of Richard Falkirk who gives here an honest-to-goodness blood and guts yarn set in the London area 150 years ago. This is a rollicking yarn, always moving as fast as the young fighter's feet.”
The Cork Examiner

“A story that deserves to be filmed. Falkirk spins a gripping yarn, blending a murder mystery into his surprisingly deep character study of the implacable but fair-minded Blackstone. It's good to know that Blackstone is here to stay.”
Cambridge Evening News

‘Neat doesn't stand a chance. I shouldn't be surprised if the Gasman doesn't floor him in the first round just like Jack Randall beat Jack Martin… And you, Blackie? Haven't you made a wager?'
Blackstone nodded. ‘Ten pounds on the Gas-man.'
‘And you a Bow Street Runner.'
‘What of it?'
‘You're supposed to break up a prizefight, not support it.'
And that, Blackstone reflected, was no more than the truth.

Blackstone's involvement in the lurid and exciting world of prizefighting also involves him with blackmail, kidnap, and murder, not to mention attempts on his own life. Moreover, rioting and the incidence of crime at prizefights had been put forward as evidence of the need for a new police force. So it is doubly important that Blackstone, the Bow Street Runner working on both sides of the law, should be successful.