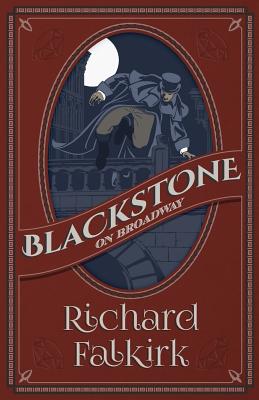 In Blackstone on Broadway, the Bow Street Runner pits his wits against the criminals of New York, in search of Captain Kidd's treasure.

An exquisite ruby lay on a piece of velvet between Edmund Blackstone, Bow Street Runner, and a nervous Mr Fogarty, the well-known London jewel fence.

'Now, Fogarty, ' said Blackstone. 'Suppose you tell me everything you know about the ruby.'

Fogarty did not at first speak, but opened a drawer in the table with trembling hands and took out a scroll of parchment. 'This is a copy of the inventory of a vessel named the Quedah, an Armenian merchant ship that was captured on 30 January 1698.'

Blackstone ran his finger down the list and stopped when he came to an item referring to the ruby. He looked up. 'And who captured her?'

The search for Captain Kidd's fabulous treasure is on and Blackstone, the Bow Street Runner, follows the trail from London's underworld to the raw, exciting city of early nineteenth-century New York.

Once again he finds himself working on both sides of the law, with allies and enemies alike amongst criminals and the police force.

Despite the help of the emancipated Fanny Campbell, the odds against him are enormous, but then so is the possible reward-the treasure.