Beyond the Olive Grove — Peter Longley 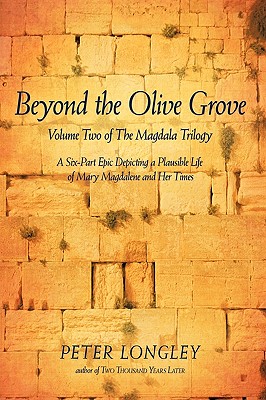 
Joshua, Maria, and Linus Flavian determine their destinies. From the Nazirite and Essenic sects to the burgeoning fishing industry on the Sea of Galilee, Joshua and his band of followers are led from obscurity to the portals of the Roman prefect in a movement poised to change the world. Th ey are members of a healing ministry that concerns the Jewish authorities that are striving for survival and security under the umbrella of Rome. Accidentally, Maria of Magdala becomes a part of this movement, and is left with an awesome responsibility. Linus Flavian pits Roman pride and ambition against a Galilean past.
The second in the dramatic new series, The Magdala Trilogy, Beyond the Olive Grove provides a fascinating commentary on the origins of Christianity that is both challenging and yet plausible, incorporating traditional beliefs, fictitious thoughts, and new controversial interpretations. With vivid prose and compelling characters, Beyond the Olive Grove offers a captivating glimpse into Biblical times.