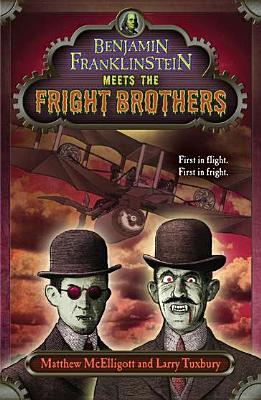 Before Victor and Benjamin Franklin can figure out why he awoke from his 200 - plus years of sleep, giant bat planes and mysterious attacks bring mayhem to Philadelphia. Only two of history's inventors could pilot such high-flying creations - the famous Wright brothers! But the red-eyed brothers don't seem quite like themselves. . . .

Victor and Ben discover that the giant bat planes are part of a nefarious plan to gain mind-control over everyone in the city. Could the brothers really want to take over Philadelphia - and can Victor and his friends crash their plans in time?

Uncover the secrets of Benjamin Franklinstein, and more of history's greatest inventors, at benjaminfranklinstein.com.
Reviews from Goodreads.com