Before We Were Yours — Lisa Wingate 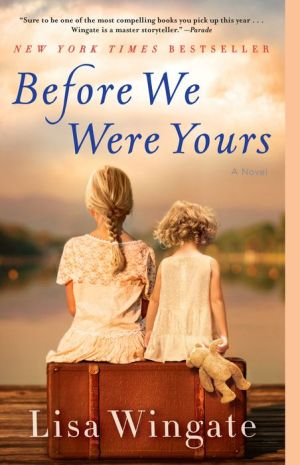 Memphis, 1939. Twelve-year-old Rill Foss and her four younger siblings live a magical life aboard their family's Mississippi River shantyboat. But when their father must rush their mother to the hospital one stormy night, Rill is left in charge--until strangers arrive in force. Wrenched from all that is familiar and thrown into a Tennessee Children's Home Society orphanage, the Foss children are assured that they will soon be returned to their parents--but they quickly realize the dark truth. At the mercy of the facility's cruel director, Rill fights to keep her sisters and brother together in a world of danger and uncertainty.

Aiken, South Carolina, present day. Born into wealth and privilege, Avery Stafford seems to have it all: a successful career as a federal prosecutor, a handsome fiancé, and a lavish wedding on the horizon. But when Avery returns home to help her father weather a health crisis, a chance encounter leaves her with uncomfortable questions and compels her to take a journey through her family's long-hidden history, on a path that will ultimately lead either to devastation or to redemption.

Based on one of America's most notorious real-life scandals--in which Georgia Tann, director of a Memphis-based adoption organization, kidnapped and sold poor children to wealthy families all over the country--Lisa Wingate's riveting, wrenching, and ultimately uplifting tale reminds us how, even though the paths we take can lead to many places, the heart never forgets where we belong.
Reviews from Goodreads.com

I absolutely loved this book. The story is based on a real-life historical place called the Tennessee Children's Home Society which was an orphanage operating during the 1930's and 1940's and run by a woman called Georgia Tann. A later investigation on the home and Ms. Tann revealed that it had been operating under Tann's direction as an illegal adoption facility. Many children were lost and never found again after they had been taken to this facility. This book is about a 12-year old river shantyboat girl called Rill Foss and her 4 siblings. All five were picked up by the police and taken from their boat when the family's father took their mother to the hospital because of problems with child delivery. Rill was left in charge of her siblings when they left, and continued to try to look after them under the appalling conditions they faced at the Children's Home. The book slips back and forth from 1939, when the children were snatched, up to the present day. The story of Rill and her siblings unfolds in these two time frames, and the story moves seamlessly through each one. I absolutely loved the book. The writing was fabulous, and the descriptions of the river and the people who lived on it, so realistic. As a 90-year old Rill (May) states near the end when explaining to Avery how she managed to survive all the hardships -
"Life is not unlike cinema. Each scene has its own music, and the music is created for the scene, woven to it in ways we don't understand. No matter how much we may love the melody of a bygone day, or imagine the song of a future one, we must dance to the music of today." I highly recommend this book, and am placing it on my special favourites list.

Before We Were Yours by Lisa Wingate
This story is told in past and present. The past is May's story. How she grew up on a riverboat, a river gypsy, her and three sisters and a baby brother. Until they were taken away one night when her parents had to leave the boat.

The present is told by Avery Stafford. A woman who lived in the limelight of being raised in a wealthy family with a father who's a senator. And she was being groomed to one day take his place.

Everything changed when an older woman in a nursing home seems to recognize her. It sets Avery on path that she must follow, must see where it leads. Even if it shakes her perfectly manicured world to its core.

I loved this story. It stirs so many emotions. Seeing the mistreatment of young children in the orphanage and the woman who smoothly lies to make a profit from their lives. The sadness of families being torn apart. Yet, how sometimes the past must be faced before we can move on to the future. Another well written story by this author.
**Tissue alert!
**Received from publisher for an honest review 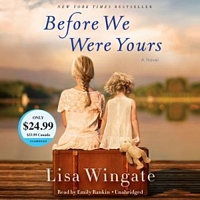