Before We Kiss — Delilah Devlin 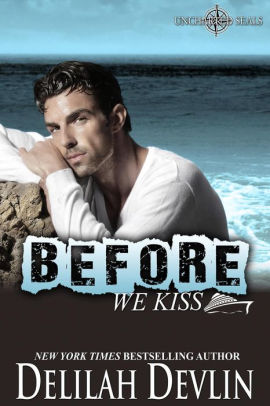 
Navy SEAL, William “Wiley” Coyote, should have known his “piece of cake” assignment would go sideways in a hurry. But he was lured by the promise of an all-expenses-paid cruise. A nice “fluffy” assignment after the last one spent escorting freighters through pirate-infested waters in the Strait of Hormuz.

A general’s daughter, Poppy Shackleford, isn’t some spoiled daughter of a man made famous for defeating insurgent forces. She has endured her own tragedies—the loss of her mother when she was young and her father stationed in Afghanistan, and the loss of her fiancé after he sustained wounds in Iraq, but not from the physical wounds that claimed his two legs—he took his own life. His death is why Poppy is involved in Soldiers’ Sanctuary, a non-profit that helps disabled soldiers adjust to their new circumstances. Her mission in life is to see that no veteran of war will ever feel so alone, so hopeless he’ll choose her dead fiancé’s path. Which is why, despite the current threats against her father, she is on this cruise, assessing the ship’s ability to accommodate the soldiers rather than sending a surrogate.

However, the first threat doesn’t come from terrorists with an axe to grind. Mexican banditos stop her tour bus heading toward Mayan ruins to shake down the passengers for their money and belongings. When one snaps a picture of her, he soon figures out there’s a much bigger payday. She knows she’s going to be kidnapped, but she doesn’t know someone is on that same tour bus who has her back.

Wiley’s unconventional takedown of her would-be kidnappers exposes the fact her father didn’t honor her wishes to fly under the radar. And now that the cat’s out of the bag, Wiley’s making it clear he’s moving into her suite for the rest of their time at sea to keep her out of harm’s way.