Because of the Baby — Debbie Macomber 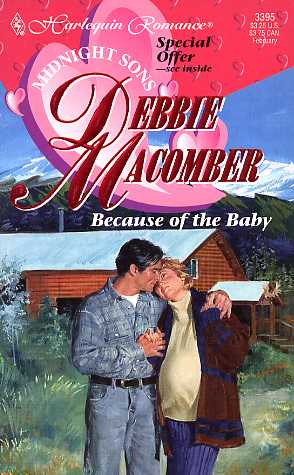 Location: 50 miles north of the Arctic Circle. Population: 150--mostly men--but growing! Because the O'Halloran brothers, who run a bush-plane service called Midnight Sons, are heading a campaign to bring women to Hard Luck!

Matt Caldwell: Charles O'Halloran's brother-in-law. An easygoing charmer who's recently moved to Hard Luck, where he's begun to renovate the O'Hallorans' old lodge. He's also begun a strategy to win back his ex-wife...starting with a Valentine card.

Karen Caldwell: She's still in love with her ex-husband. Her reaction to him at his sister's wedding--and afterward--certainly proved THAT. It also left her pregnant.

Now Matt wants her to marry him again, to live with him in the lodge at Hard Luck. And not JUST because of the baby!