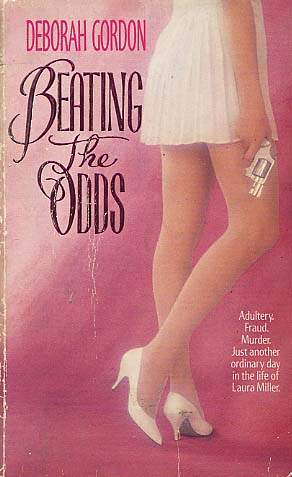 AND YOU THINK YOU'VE GOT PROBLEMS...

Meet Laura Miller. Smart and sexy, she's the mother of two great kids, the soon to-be ex-wife of a confessed philanderer, and the daughter of an irrepressible widow eager to re-marry her off She's also way over her pretty head--in murder.

A U.S. district judge has just been killed -- and the list of suspects is longer than the arm of justice. There's the all too calm wife. The corrupt, womanizing insurance agent. The charismatic state senator with his eye on the governor's mansion. And the kinky blond mistress with ties to the mob.

Except now she's dead. That's when Laura starts sleuthing with a vengeance ...while fending off the amorous advances of a husband who suddenly wants her back ... secretly lusting after a gorgeous hunk ... and trying to keep everything from falling apart. Now she's going undercover to catch a two-time murderer.

Sometimes, life is just about...BEATING THE ODDS
Reviews from Goodreads.com