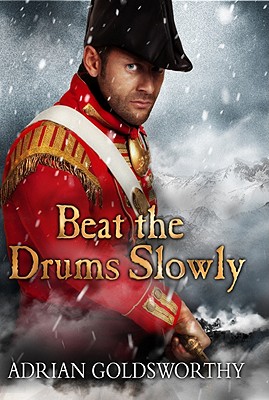 
Beat the Drums Slowly is the second novel in a brilliant new Napoleonic series from acclaimed historian Adrian Goldsworthy, whose non-fiction history has had terrific reviews.
Second in the series begun by True Soldier Gentlemen, the story takes our heroes through the winter snows as Sir John Moore is forced to retreat to Corunna. Faced with appalling weather, and pursued by an overwhelming French army led by Napoleon himself, the very survival of Britain's army is at stake. But while the 106th Foot fights a desperate rearguard action for the newly promoted Hamish Williams, the retreat turns into an unexpectedly personal drama. Separated from the rest of the army in the initial chaos, he chances upon another fugitive, Jane MacAndrews, the daughter of his commanding officer and the woman he is desperately and hopelessly in love with. As the pair battle the elements and the pursuing French, picking up a rag-tag band of fellow stragglers along the way as well as an abandoned newborn, the strict boundaries of their social relationship are tested to the limit with surprising results. But Williams soon finds he must do more than simply evade capture and deliver Jane safe and sound to her father. A specially tasked unit of French cavalry is threatening to turn the retreat into a massacre and Williams and his little band are the only thing standing between them and their goal. As military historical fiction continues to thrive, the time is right for a new high-quality
Napoleonic series.
This series combines the intelligence and detail of Patrick O'Brien with the excitement of SHARPE and will culminate with the battle of Waterloo to coincide with the 200th anniversary in 2015.