Batman: A Death in the Family — Jim Starlin 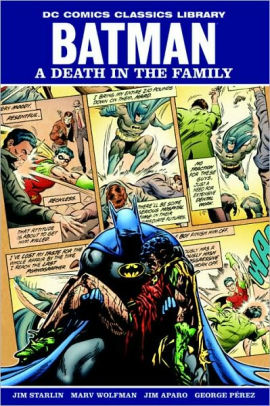 The Joker teams up with the most unlikely allies to kill the Boy Wonder… The Fans.

It was the Caped Crusader's fiftieth anniversary, and his fans were given a choice--keep the status quo of the Dynamic Duo, or return Batman to what he was created to be--a brooding, one-man war on crime. A vote was held, the results were honored and history was made--having been handed is most devastating defeat, Robin was killed and Batman was once again Gotham's lone Dark Knight.

But what would the ramifications of this tragedy be? Would Batman become a more focused champion of justice or a reckless vigilante, unable to recover from such a loss? These questions were answered in A LONELY PLACE FOR DYING-- a five-part follow up story, which answers the question, does Batman need a Robin?

This volume of DC COMICS CLASSICS LIBRARY collects both of these iconic tales, which defines the relationship between the Dynamic Duo. Written by Jim Starlin and Marv Worlman and with art by Jim Aparo, George Pérez and Tom Grummet, these stories originally ran in BATMAN 426-429, 440-442 and THE NEW TITANS 60-61. Also includes anecdotes by writer Len Wein and a very rare alternate page in case the readers voted to save Jason.
Reviews from Goodreads.com