Back 2 Bizness: The Return of the Mayor — Al-Saadiq Banks 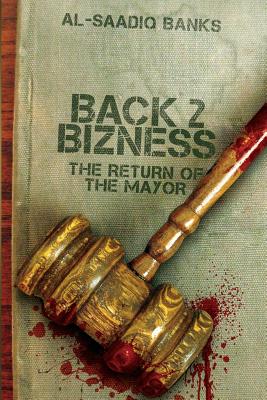 The “Free The Mayor Campaign” was a success! But, how long can he remain a free man? Brick City’s infamous kingpin known as the Mayor is shockingly released after serving twelve consecutive summers of the lifelong incarceration that he was originally sentenced to. He owes all thanks to his larger than life, ghetto fabulous attorney, Tony Austin. The twelve year layoff has the Mayor feeling as if the streets miss him and his prosperous hustle game. He feels that the game is in dire need of his expertise to pump life back into it. His hood politics are in order as he embarks on a new and improved campaign. He’s been studying his blueprint for well over a decade and it’s now time to go to work. His mission is simple and smooth, so he thinks, as he puts the wheels and soldiers in place to regain control of the city. The Mayor’s plan seems to be hater and snitch proof for the moment, but that moment doesn’t last very long. His primary goal is to restore the city and lift the recession his way. Nothing will stop him; not even the gang leaders who are now in control or the Feds who trail him step by step. He will stop at nothing until his operation takeover mission has been completed. Will his mission be completed or will he go down in history as just another used-to-be-kingpin whose time has run out?
Reviews from Goodreads.com