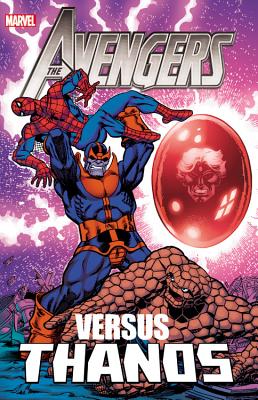 Eternal. Nihilist. Madman. Would-be lover of Death itself. All these things is Thanos of Titan, and even before he created the Infinity Gauntlet and decimated half the universe, he was still a mighty force to be reckoned with. And here, collected in one volume for the first time, is the complete story of Thanos' first life...and first death. Witness as Thanos targets Captain Marvel and the Avengers in a bid to become a god, manipulates Adam Warlock, and finally lays siege to the Earth itself! Guest-starring Daredevil, Spider-Man, the Thing, Moondragon, Drax the Destroyer and more! By cosmic mastermind Jim Starlin! COLLECTING: Iron Man (1968) 55; Captain Marvel (1968) 25-33; Marvel Feature (1971) 12; Daredevil (1964) 105-107; Avengers (1963) 125; Warlock (1972) 9-11, 15; Avengers Annual (1967) 7; Marvel Two -In-One Annual 2; material from Logan 's Run 6
Reviews from Goodreads.com