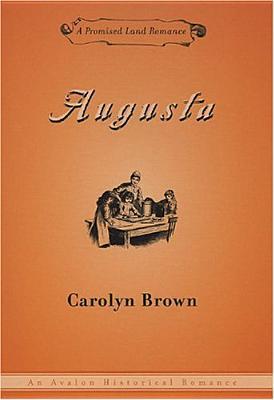 Share:
Augusta "Gussie" Dulan is the only Dulan sister to make it all the way to California on the wagon train for brides. Each of her four sisters has taken off along the trail to marry up with a man they fell in love with and now Gussie is hoping to find a man to love here at the end of the trail. Dressing in her fabulous red satin dancing dress, complete with black lace and feathered headdress, Gussie lines up with the other potential brides to see whom it is that they will marry. Gideon Jefferson, the town preacher, takes one look at Gussie and is horrified at her saloon girl outfit, but things turn even worse when his number is called and he "wins" Gussie's hand in marriage. Gussie is less that pleased to be stuck with this wretched, assuming man. Neither wants to be married, so they make a pact that she will be on the first wagon train out after the winter. In the meantime, Gussie will come home with him and tend to his four young daughters and run his unruly house. It seems like a good arrangement. But Gussie is much more than Gideon could have imagined. She not only keeps the house immaculate, the table filled with delicious food, the girls clean and happy, she has the women of the town following her example and turning Gideon's and the rest of the men's lives upside down. Neither Gussie nor Gideon will admit they actually have feelings for one another. It takes a lot of courage, four little girls, and a whole town to bring them both to their senses.