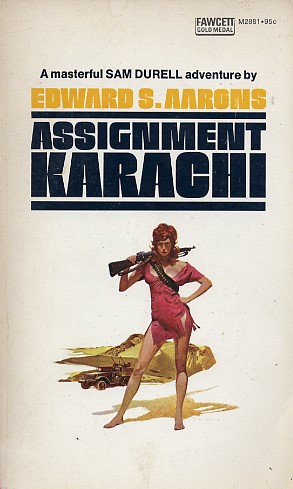 ... these were the gay facades masking the sinister filth that went on in the tortuous streets, diverting tourists from dim harems where flesh and dope are bought and sold like cigarettes, from dark alleys where a man's life can be had for the price of a meal. This was the Middle East Durell knew like the palm of his hand. It was the perfect playground for communist agents--and the last place in the world for a beautiful millionaire businesswoman to go adventuring.

But nothing could persuade Sarah Standish to forsake this dangerous expedition to the grim mountains near the Chinese border--not Durell, not the mysterious Red agent who, little by little, was sabotaging the exploring group, not the slaughtered bodies of two who'd already been murdered, not even the savage attempts on her own life.

And yet Durell had to keep her alive--knowing all along that if the yawning mountainous cliffs didn't get her, the communists would.
Reviews from Goodreads.com