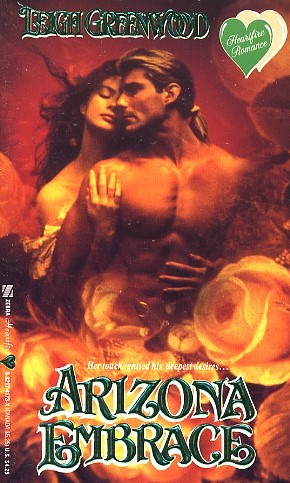 HE SWORE TO HUNT HER DOWN
To bounty hunter Trinity Smith, tracking down criminals wasn't just a living -- it was his life's work. And this time out, he was bringing in the most daring desperado of them all: Victoria Davidge, the gold-digging seductress who'd been found guilty of murdering her husband. But nothing could have prepared the hard-riding loner for the voluptuous vision that greeted his jaded eyes when he galloped onto her Arizona ranch. All silken curves and smoldering sensuality, the fiery-haired fugitive ignited a desire he couldn't resist. Though hiring on as an extra hand seemed the surest way to uncover Victoria's most sinful secrets, her comely charms were fast distracting him from his lawful duty!

SHE WOULD NEVER GIVE HERSELF UP
Victoria suspected there was something strange about her ruggedly handsome new employee, but she never figured him for a hired gun who aimed to take away her precious freedom for a crime she hadn't even committed! Well, let him just try -- she'd lead him a merry chase clear across the west. But she soon discovered that Trinity Smith wasn't a man to be crossed... or denied. And from the moment he wrapped her in his bold embrace, Vicky knew she could never escape the searing passion he awoke in her hungry heart... a passion she would give up everything to claim!
Reviews from Goodreads.com