Are You There, God? It's Me, Margaret — Judy Blume 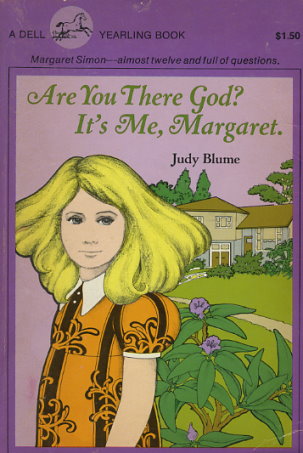 No one ever told Margaret Simon that eleven-going-on-twelve would be such a hard age. When her family moves to New Jersey, she has to adjust to life in the suburbs, a different school, and a whole new group of friends. Margaret knows she needs someone to talk to about growing up -- and it's not long before she's found a solution:

Are you there God? It's me, Margaret. I can't wait until two o'clock God. That's when our dance starts. Do you think I'll get Philip Leroy for a partner? It's not so much that I like him as a person God, but as a boy he's very handsome. And I'd love to dance with him...just once or twice. Thank you God.

Are You There God? It’s Me, Margaret is a book for young adult readers by American author, Judy Blume. Margaret Simon is almost twelve, and her family has just moved to Farbrook, New Jersey from New York: away from her school, her friends and her Grandma, Sylvia Simon. She’s going to a new school, but that’s not her only concern: she’s got no friends locally, she REALLY would like to grow up (i.e. have something to fill her bra, and get her period) and, having been brought up without any, she wants to try out some religions to see which one she wants to be (if any).

Margaret is utterly beguiling: she’s smart, but still naïve, she’s eager to belong and ever so genuine. Her conversations with God are a pure delight, always beginning with “Are You There God? It’s Me, Margaret” and asking for help with whatever is troubling her at the time. Margaret’s family, her friends (and their families), her secret group, her teacher and her classmates, all these are easily recognisable from everyday life. And there was likely a Philip Leroy somewhere in adolescent past of most women.

While the mention of some things places this story firmly in the early nineteen-seventies, much of what concerns our pre-teen protagonist still concerns this age group today, and the way Margaret deals with is equally valid in the modern world. It’s easy to see why this book was banned in some places at certain times, especially in the USA: Blume addresses subjects that might be quite sensitive (religion, peer group pressure, nascent sexuality) head on. It is refreshingly ambivalent about God and doesn’t promote one religion over another. Funny, moving and even a little thought-provoking, this is a truly enjoyable read. 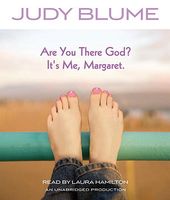