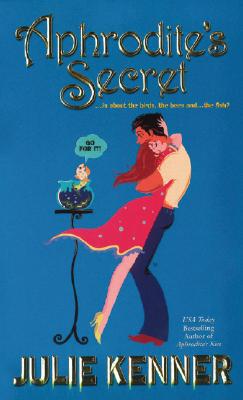 Jason Murphy could talk to creatures of the sea. He could also change into a dolphin, and had a ton of other superpowers like all Protectors; but none of them really helped his situation. The love of his life didn't trust him anymore -- thought his devotion was ... fishy. Sure, she had her reasons: when she'd needed him most, he'd been focusing on his supercareer. But that was all over. He vowed to reel her back in.

It wasn't going to be easy. His outcast father was still plotting world domination, and Jason was still pledged to protect mortals everywhere. His other Protector friends didn't trust him, feared his commitment to justice. And though Lane still loved him -- he could see it in her eyes -- how to win her hand in marriage seemed the best-kept secret ever. Heck, pretty soon Jason would swear that beating up the bad guys was easy It was this relationship stuff that took a true superman!
Reviews from Goodreads.com

Aphrodite’s Secret by Julie Kenner
Protectors/Superheros Series Book 3 (5th Story)
Jason Murphy is a Protector with bad timing. When his girlfriend gave him what should have been good news, he decided to take care of some other business before celebrating. Who knew he’d be held captive for six long years. By the time he was allowed back into the real world he had lost almost seven years of his life. He had vengeance on his mind.

Lane Kent had been alone for a long time. She did have her foster brother Taylor who watched over her and Davy, her son. And now she had a whole group of friends and secrets. Taylor’s wife Zoe and her brother Hale are Protectors and now she finds out the man who left her so long ago is also one. Even though Jason wants to be part of her life once again she just can’t do it. Being raised in foster homes all her life all she wants for her son is a stable home. And she found just the guy who can give them that. And it’s not Jason Murphy.

One of Jason’s unique gifts is talking with those of the fin family. And why not when he is most comfortable in the water himself. I enjoy the way the author brings back the previous characters and their unique personalities into each book, including Elmer the ferret. The fourth book in the series, which is actually the sixth story, is Aphrodite’s Flame. Mordi finally gets his story told.
**Sexual content
http://justjudysjumbles.blogspot.com/2013/07/julie-kenner-superhero-series.html