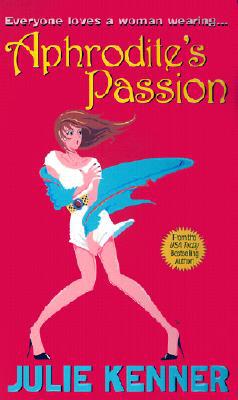 Aphrodite's Girdle was missing, and Hale knew the artifact would take all his superpowers to retrieve. The mortal who'd found and donned it--one Tracy Tannin, the descendent of a goddess of the silver screen hadn't exactly been as popular as her grandmother, not before the belt. Now everyone wanted her ... including some very nasty bad guys who weren't interested in her smile.

But the golden girdle could only be recovered through honest (or not entirely dishonest) means, which meant there was no chance for Hale to simply become invisible and whisk it away. (Although, watching Tracy, he found himself imagining other garments he'd like to remove.) No, there was little chance to evade interaction with the woman. Maybe he should convince her she was as desirable as he saw her (which was too desirable for a mortal ... ). Only then would she realize she was worth loving no matter what she was wearing or what she wasn't.
Reviews from Goodreads.com

Aphrodite’s Passion by Julie Kenner
Protectors/Superheros Series Book 2 (4th story)
Hale has some issues with mortals. As a famous romance cover model he enjoys their attentions and he’ll protect them, but that’s as far as it goes. Well, until his sister Zoe went and married one. Now Taylor and his friends are mortals that Hale…..well he likes them…..against his will of course. So when he is assigned to find Aphrodite’s Girdle and has to get close to a mortal he figures he’ll do what he does best. He’ll seduce her, get the belt and be on his way. That was his plan anyways.

Tracy Tannin is far from famous like her grandmother was. In fact, she finds herself rather plain. When she finds an unfashionable belt her grandma left her, she starts wearing it for confidence and it seems to work. Suddenly men are giving her attention and asking her out. And mugging her. Her life takes a sudden turn and at least the handsome Hale is there to help her.

One of Hale’s superpowers is animalinguist, he can talk to animals. His constant companion is Elmer the ferret. The author does a remarkable job of bringing Elmer to life and he often steals the show with his thoughts and comments. This is actually the fourth story with some of the same characters. If you enjoy series you’ll want to start with The Cat’s Fancy, Aphrodite’s Kiss and Aphrodite’s Embrace. The next book in the series is Aphrodite’s Secret.
**Sexual content
http://justjudysjumbles.blogspot.com/2013/07/julie-kenner-superhero-series.html