Anything You Can Do — Sara Garrett 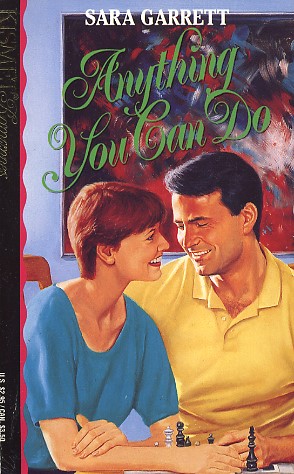 Bailey Russell had heard about the hot-shot attorney before he arrived in Kansas City. Rumor had it that Austin Travers was a big gun who'd been brought into the rival firm to shake things up. But she'd never expected Austin to be drop-dead gorgeous, too. With electric blue eyes, thick black hair, and a solid build, Austin was the kind of man most women fell for in a second.

But Bailey Russell was not like most women. She possessed a competitive streak that came alive whenever Austin was near. If he ran, she would sprint. If he swam a single lap, she would swim two. And if he argued a case against her firm, she would jump right into the fray. Bailey was determined to prove she could do anything Austin could do -- and do it much better!

Whenever Austin was near Bailey Russell, he was a torn man. Part of him wanted to take her in his arms and kiss her smooth, porcelain skin. But another part of him felt compelled to suit up in armor and prepare for battle. Austin loved to see the fire of challenge in Bailey's green eyes. And the more she fought him, the more he wanted to win her heart.
Reviews from Goodreads.com