Anna and the Duke — Kathryn Smith 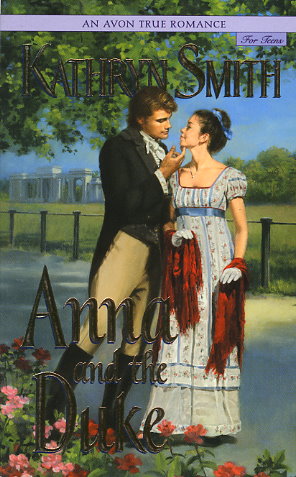 At the very least, anyone else in Anna Welsley's position would be satisfied. Anna is to inherit a fortune, and after a glittering London debut last Season, she is now engaged to a duke's son. Anna herself does not understand the vague feeling of dissatisfaction. While her mother industriously plans Anna's wedding, Anna herself reads poetry and wonders if what she's in is love or just an arrangement.

As the estranged Scottish son of an English duke who has just died, Ewan MacLaughlin is the reluctant heir to his father's title. Arriving in London, he must face his father's widow, half sister, and half brother, Richard, who was fully expecting to become the duke himself. While acquainting himself with his newfound relations, Ewan finds himself more and more often in the company of Richard's fiancee, the beautiful Anna.

When it becomes clear that Richard is conspiring against Ewan, Anna is compelled to warn Ewan. But what begins in innocence soon becomes betrayal as Anna finds the answer to the question in her heart -- in Ewan.
Reviews from Goodreads.com