Angels of Anguish — Sherri L. Board 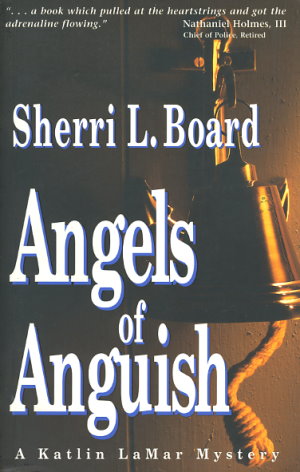 Deputy Probation Officer Katlin LaMar is serving on the Gang Violence Suppression Unit in Orange County, California. When Katlin's godson is murdered, she is convinced that one of her gangbanging probationers killed him. While seeking out her godson's murderer, Katlin finds herself falling deeper and deeper into clues that are both obscure and hauntingly incredulous: that baseball is more than just an American pastime, that the man she has fallen in love with believes that the priest who personifies her faith is not what he seems, and that youth no longer means innocence incapable of wrongdoing.

Katlin LaMar dispels the hundred-year-old myth that Probation Officers are simply social workers. But instead, is an example of what is happening to many Probation Officers across America- -having to arm themselves against their probationers. And thus, becoming the counselor/cop.