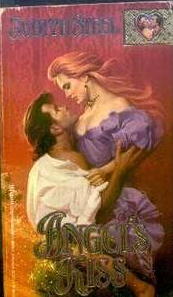 FROM THE SCANDALOUS SECRETS OF HER BIG-CITY PAST . . .
As shots ring out along the dusty streets of Alder Gulch, Willemina Glenn ducks for cover. Had she spent every last penny fleeing St. Louis --- only to get herself killed in this wild Montana boom town? Then a tall, strapping stranger steps out of the shadows --- and Willemina realizes she has more to fear in this man whose searing glance sends shock waves of desire coursing through her.
. . . TO PERIL AND PASSION ON THE WESTERN FRONTIER
With his business partner --- and best friend --- shot dead, Craig Rawlins curses the day he became owner of the jinxed Empty Barrel Saloon. Then Willemina Glenn comes on the scene. What's a gorgeous, classy woman doing in a bawdy mining town like this? Willemina isn't revealing any of her secrets. And neither is he. But when her life is threatened, Craig knows he'll risk body and soul to save the elusive beauty . . . even if he has to turn alder Gulch upside down to do it!
Reviews from Goodreads.com