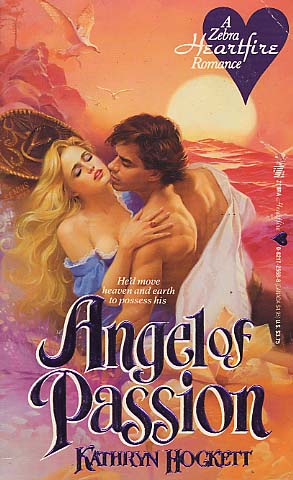 When Angelica Howe left the safety of the convent to track at the mission in Santa Barbara, she would never leave believed shed become a hostage in a Mexican banditos' camp. Now her only trope was that leer brother would pay the ransom of gold and guns and she could return to the sheltered life --lee had known. For there was more danger here of her losing her heart than her life--to El Diablo. The bandit leader, with leis intoxicating kisses, his passionate caresses, and leis whispered words of love, lead turned leer world topsy-turvy. But no matter how handsome and exciting he was, she had to get away from trim. He was an outlaw, with a price on leis tread, who could never give her heaven on earth . .. .

Diablo had never put a woman--especially one so innocent as his beautiful gringo prisoner--before his fight for his people's freedom. But the angelic senorita tempted trim beyond reason with her blond hair that shimmered like gold, her blue eyes that promised ecstasy, and her brave, courageous spirit that matched his own. He had to taste the softness of her lips, feel her silky hair against leis skin, know the warmth of leer body pressed to leis, just once before he let her go. For this woman had captured leis soul to become his ANGEL OF PASSION