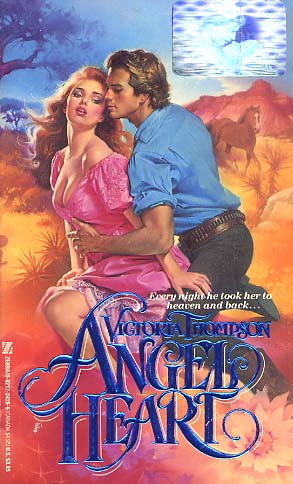 HEAVENLY PLEASURES
Ever since Angelica's father died, Harlan Snyder had been angling to get his hands on her ranch, the Diamond R. And now, just when she had an important government contract to fulfill, she couldn't find a single cowhand to hire on--all because of Snyder's threats. It was only a matter of time before she lost the ranch.... That is, until the legendary gunfighter Kid Collins turned up on her doorstep, badly wounded. Angelica assessed his firmly muscled physique and stared into his startling blue eyes. Beneath all that blood and dirt he was the handsomest man she had ever seen, and the one person who could help her beat Snyder at his own game--if the price were not too high...

DEVILISH DESIRES
Before Kid Collins knew what hit him, he had somehow agreed to act as a hired gunfighter--and for a lady. Or at least she looked like a lady, with her carefully pinned red hair and proud green eyes. But no lady would be trying to run a ranch on her own, let alone take on the likes of Harlan Snyder. She needed Kid Collins' help, all right, but his help came with a price attached. A price of a night in his arms, when he would plunder those prim red lips of hers and tease her milk-white flesh with his gun-callused hands--and take her to heaven and back again as his ANGEL HEART