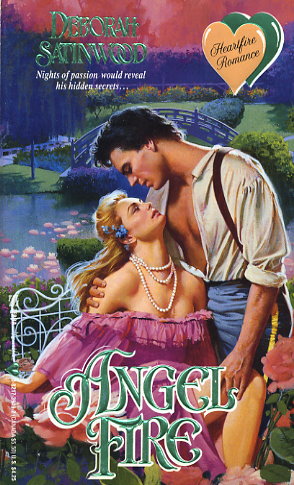 A MAN OF MYSTERY
Cameron Forrester had lost all his money, his home, and his family in the War Between the States, and now he was beginning to think he had lost his mind. What kind of father would pay a complete stranger to marry his daughter only to ensure this new husband's "death" shortly thereafter? Cameron understood revenge -- he had his own plan for his family's killer with the money he was about to earn -- but Angelina's father seemed bent on a course that could only lead to disaster. Yet once Cameron saw his bride-to-be with her honey-colored hair, gray-green eyes, and a waist small enough to span with his hands, he devised an ending of a most different kind. With practiced expertise he would kiss and caress this exquisite innocent, making her his in a sensual storm of passionate abandon!

AN ANGEL OF MERCY
When her over-protective father told her of her new suitor, Angelina O'Brien was uncertain of what to expect. She had seen how the lack of love between her parents had torn their marriage apart, and Angelina had no desire for a similar experience. Thus, she never dreamed she'd come face to face with a true war hero whose raven black hair and piercing eyes of blue drew her like a magnet. Angelina sensed that there was much more to the mysterious Mr. Forrester than he was willing to tell, but the passion she felt for him could never be denied. She longed to run her fingers through his silken hair, feel the warmth of his lips on hers, and be held in the heat of his fierce embrace, forever his...ANGEL FIRE
Reviews from Goodreads.com