An Owl Too Many — Charlotte MacLeod 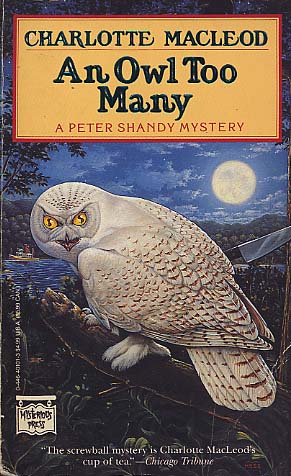 Share:
The Annual Owl Count is serious business at Balaclava Agricultural College. So why does a team that includes the redoubtable Professors Shandy, Stott and Binks also include a boorish avian ignoramus like Emory Emmerick? And how could Emmerick have had the temerity to get himself netted and stabbed to death while in pursuit of an extremely rare Snowy Owl?

It's clear Emmerick was no gentleman. Oddly enough, he also wasn't the site engineer for the new college TV station, despite his claims. So just what was he doing in the town of Lumpkinton--did it have anything to do with Professor Winifred Binks' newly inherited millions?

When unknown villains kidnap Professor Binks, Peter Shandy--the Hercule Poirot of the turnip fields--speeds into action. Suddenly, Peter and his confederates are in a runaway tugboat, sweeping down a flood-swollen river and facing the dire consequences of what could be the most hostile takeover in corporate history.