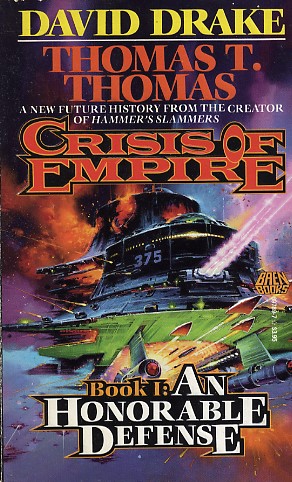 WARNING: THIS BOOK TAKES NO PRISONERS

Introducing
• CRISIS OF EMPIRE •
THE SERIES
David Drake has conceived a future history that is unparalleled in scope and detail. Its venue is the Universe. Its domain is the future of humankind. Its name? Crisis of Empire.

THE BOOK
In An Honorable Defense, co-authored with Tall Award-winner Thomas T. Thomas, the Crisis of Empire begins -- with the death of the Emperor. Will those who steer the course of empire stand behind his infant successor? It is a forlorn hope; if even one Sector Governor or Fleet Admiral decides to grab for the Purple, a thousand planets will be consigned to nuclear fire.
Reviews from Goodreads.com