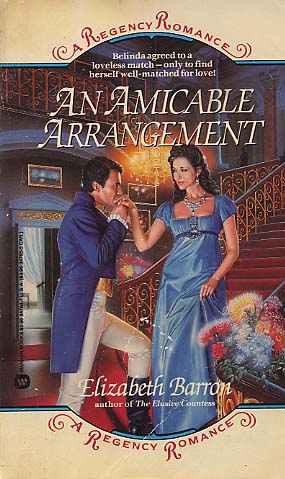 "YOU CANNOT FORCE ME TO MARRY THAT DREADFUL MAN AGAINST MY WILL...THIS IS 1814!"

Belinda Hanbury's blue eyes blazed with fury. She loved her father dearly, but this latest ploy against poverty simply would not do. Pretty Belinda would not wed a corpulent man thirty years her senior, however well-lined his pockets. Still the 'courtship' progressed...until her odious intended turned lecherous in a darkened theater box -- and Belinda knocked him senseless with a bottle of champagne! Such explosive melodrama quickly brought that dashing light of the London stage, Baron Francis Kenmore, to Belinda's side. Actor, producer, and nobleman, the wealthy Kenmore gallantly offered to marry her -- temporarily, and in name only, after he heard her tale of woe. But could naive Belinda convincingly act the part of a blissful bride in high society? What were the notorious Kenmore's real motives? And what if these mock mates were to actually fall in love?
Reviews from Goodreads.com