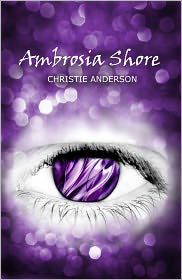 Share:
"Christie Anderson has out done herself again! Ambrosia Shore is filled with love, danger, suspense, forgiveness, and loyalty. It has plenty of surprise that will keep you on your toes. Simply amazing!" ~Just Me, Myself, and I Book Reviews

"Each book in this series is more intriguing and alluring than the one before!" ~Amazon Reviewer

Sadie never dreamed she would see the world of Ambrosia with her own two eyes, just like Rayne never believed he would have the chance to share it with her. Finally, they can be together without any lies, without hiding who they are, in a world that shines brighter than Sadie could ever imagine. There's only one problem. Rayne had to break grievous laws in order to bring her there, and he is expected to pay the price. Sadie believes her father has the power to free Rayne, but he has been missing for days. Now, Sadie is alone in an unfamiliar world and desperate to help Rayne before it's too late.