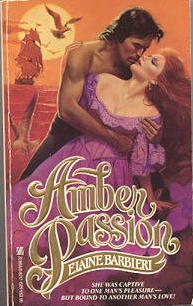 was the dinner she had shared with her beloved Captain Worth Randolph. But when she awoke from her drugged sleep, their ship had been captured - and the magnificent auburn-haired beauty lay helplessly bound hand and foot. "Forget your past, you belong to me now!" her jailor, the traitorous Jason Marsh commanded. But even as his eyes raked hungrily over her voluptuous curves - even as his cruel lips left a trail of searing kisses that inflamed her senses - she vowed she'd remain loyal to her one true love...

THE FIRST THING WORTH DEMANDED

when he opened his eyes was to see his adored Melanie. But his beautiful Oriental captor, the cruel Sie-Seh, had other plans for the arrogant captain. "The red-haired one finds consolation in the arms of another," she sneered, caressing the rippling muscles of his tightly bound arms. Yet even as rage filled his heart at Melanie's betrayal - even as an animal pleasure spread irresistibly over his flesh at Sie-Seh's exquisite touch - Worth swore he'd never succumb to another woman's charms. He'd fight to the death for one last chance to claim Melanie as his own, for one last moment of