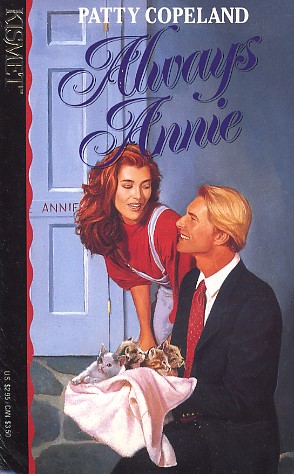 They called her "Apple Annie" because of the creative way she used apples in her catering business. Now, after years of serving delectable meals at hundreds of Chicago events, Annie Rafferty was ready to realize a life-long dream. The opening of her restaurant marked the supreme test of Annie's culinary skills.

The only thing standing in her way was the tall, blue-eyed hunk who kept sniffing around her restaurant with disapproval. Ted Carlyle, head of the law firm upstairs, also owned the building, and he wasn't happy about having a restaurant -- especially an Irish restaurant -- on the premises.

Infuriated by his arrogance, Annie set out to prove herself to Ted Carlyle. With a dash of laughter, a sprinkle of free-spirited mirth, and a generous amount of advice from her big Irish family, Annie found herself in his arms. However, despite a few magical kisses, Ted Carlyle was sticking to business -- the business of scrutinizing her restaurant. The man was maddening. But Annie had been warned that she wouldn't recognize love if it fell right into her own pot of soup!
Reviews from Goodreads.com