Allure of the Game — Danielle Santiago 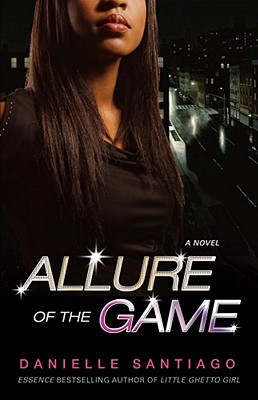 
Twenty-year-old Arnessa didn't grow up on the streets. But when her mentally ill mother abandons her and her older brother is murdered, Arnessa has no choice but to hustle just to keep herself and her little sister alive.

Kisa "Kane" Montega, on the other hand, has a wonderful marriage, two beautiful children, and lives in a stunning home on the outskirts of Charlotte. Her cousin, Kennedy, has spent two years away from the volatile music industry, focusing on her children and building a solid foundation with her rap star fiancÉ, Chaz. But in spite of their success, both Kane and Kennedy are gravitating back to their old ways and the game they thought they'd left behind. After a chance meeting, Arnessa goes from being a low-level dealer to partner in their cartel. But the bigger their empire gets, the more haters they have to contend with -- and the more each one of them stands to lose.

Sexy, suspenseful, and unflinching, Danielle Santiago's Allure of the Game gives fans exactly what they've been hoping for -- a deeply satisfying conclusion to an unforgettable trilogy, packed with insight into the mean streets she knows so well.