All Through the House — Janice Bartlett 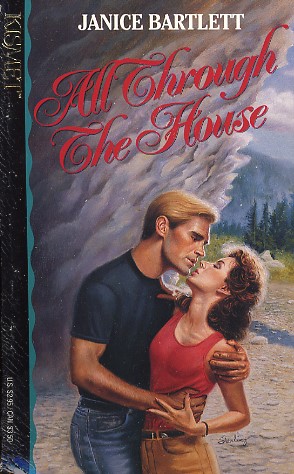 When Abigail McLeod landed the listing for the Irving House, she thought her luck had changed. Between the demands of her job as a real estate agent and her active four-year-old daughter, Abigail's life resembled a juggling act. If she could sell the turn-of-the-century mansion, cornplete with towers, turrets, and gingerbread trim, it would mean smooth sailing for her agency - and her finances.

The only problem was that the house was occupied by a tenant - a male tenant with a sexy voice. Over the phone he assured Abigail that it was fine to show the place, but every time she appeared with a prospective buyer, something terrible happened. Tall, rugged Nate Taggart claimed to be an architect. But as far as Abigail was concerned, the man was a jinx!

It was her eyes that first struck him - forest green eyes that could make a man wax poetic. Eyes that made Nate want to sweep Abigail into the ballroom and guide her across the shiny floor, twirling beneath the glittering chandeliers. A woman like Abigail could make a man forget his difficult past and defy his blueprints for the future. But Nate had a lot at stake. Could he afford to abandon his dreams for the love of Abigail?