All I Desire — Rosemary Rogers 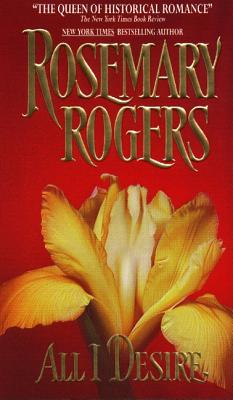 Angela Lindsay enjoyed a pampered existence among French society, but she has had to trade it all and agree to live on her father's New Mexico ranch in order to collect her inheritance. While the wide-open land may boast a rugged je ne sais quoi, it's a certain insolent man in uniform who is the first irritation of her new life -- and an irresistible lure to her heart.

Captain Jake Branden has little tolerance for a fancy rich lady ill-prepared for the rigors of a territory rife with danger. He may have to escort the city miss from New Orleans to New Mexico, but he doesn't plan any concessions for his charge's delicate sensibilities. Yet when they finally arrive at the hacienda, Jake wants to protect Angela from the shock of meeting Judith Lindsay...the beautiful half-sister Angela had never known existed. And Judith is claiming to be his fiancee! But the sapphire sparks of defiance shooting from Angela's eyes and her breathless fury will challenge his cool indifference -- until the savage western skies kindle their passion into a liquid fire that roars out of control.
Reviews from Goodreads.com