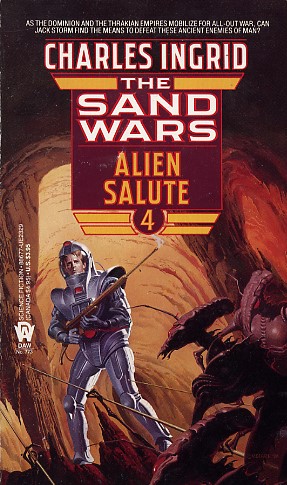 THE CALL TO ARMS--
had come at last. The treachery of the Thraks on the planet Bythia had resulted in the death of Jack Storm's commanding officer, and in the loss of many a fledgling Knight.

Now, the Emperor of the Triad Throne had handed Jack command of the Knights and with it the responsibility of overcoming the invading Thraks. But the perils facing Jack were almost overwhelming. Bogie, the sentience within Jack's battle armor was fighting a life-and-death struggle, and it was Jack who might ultimately pay the price for the alien's survival. The Thraks themselves had learned new tactics of destruction to turn against the Knights, and even within the empire there were many intent on Jack's ruin.

Then, suddenly, a new player appeared in the games of conquest. A mysterious race from beyond the known worlds whose spaceships roved the starways, bringing annihilation to human and Thraks planets alike!
Reviews from Goodreads.com