Across the Universe — Pamela Sargent 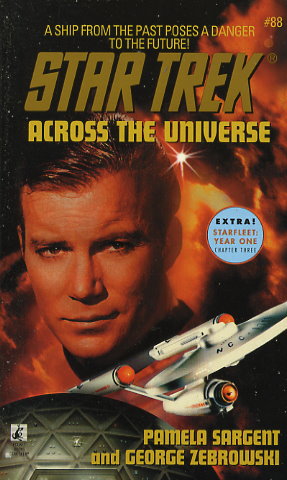 The Hawking left Earth during the 21st century on a one-way mission to colonize a distant world. Due to the relativistic effects of pre-warp travel, its crew has aged only thirty years while two centuries passed outside the ship. When the Starship Enterprise- comes to the rescue of the malfunctioning Hawking, the colonists find themselves thrust into a universe and an era that has left them behind.

Captain Kirk intends to help the colonists adjust as best he can, but the task is not a simple one. The newcomers are survivors of a more violent, more paranoid time --and they have brought old suspicions, and an ancient weapon of mass destruction, into a world of unexpected challenges and dangers.
Reviews from Goodreads.com