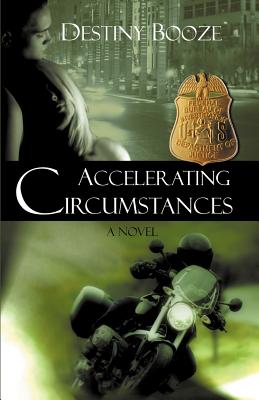 Jenny is different. She can read people's minds.

At age seventeen, Jenny Reid was arrested for killing her own mother. There was no evidence that an intruder entered the house. No one believed her as a teenager when she tried to tell them how she felt the killer's rage saturated within the walls, that she knew the presence of evil had been there. The police thought she was crazy, not psychic.

A conviction was never made in the case due to lack of evidence. Jenny is still the sole suspect, but now, she is doing something about it. She's on the right side of the law, an FBI agent determined to finally find justice for her mom.

The time has come to set things right and nothing will stand in her way. She'll come up close with evil again and face the ultimate choice-kill or be killed in these ACCELERATING CIRCUMSTANCES.

About the Author: Destiny Booze

Destiny Booze grew up at a campground in Virginia where her childhood was full of hard work. There was also an element of excitement as she met a large variety of diverse people with widespread tales about fun and adventure. She grew into a young lady with a very active imagination.

Destiny attended Virginia Western Community College for two years. Her writing career began as a community journal-ist, yet creative writing was always her passion. In May of 2009, she released her debut romantic suspense novel, Al-tered Beginnings.

Destiny resides in Botetourt County, Virginia with her husband, son and house full of pets where she strives to be the best wife, mother and writer that she can be. Her family is always priority number one. Other things of great impor-tance to her are friends, and YOU, the readers!

To learn more about the author or to find correspondence details, visit her website at http://www.destinybooze.com.

Make-believe is more than a child's game!
Reviews from Goodreads.com