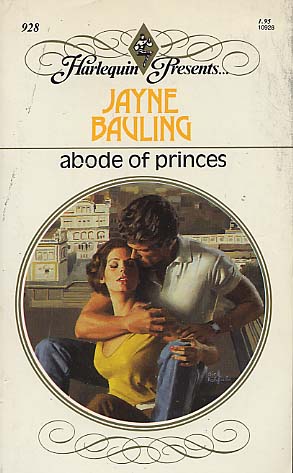 Was then no quarrelling with Fate?

Before journeying to beautiful Rajasthan in India to meet her fiance's best friend, Jon Steele, Cadence had blithely believed she controlled her destiny.

She'd no idea that a vast consuming passion would redefine her feelings about love and friendship and make her engagement impossible. Jon, on the other hand, read the danger signs immediately--knew exactly what he and Cadence would have to do to shield the man who was like a brother to him. They'd have to deny love.

But what would happen was out of their control--no matter how Jon and Cadence tried to resist.

HERE IS THE MILLS AND BOON BACK COVER:

ABODE OF PRINCES: The magic and savagery of India surrounded Cadence from the moment she encountered Jon Steele, and she tried to convince herself that she was carried away by the romantic atmosphere. She was engaged to Christopher, Jon's best friend, and she had no intention of betraying him! But then she found herself having to lie and betray in order to hide her feelings, and she knew that sooner or later she would have to choose between the warmth of affection, and a passion that neither she nor Non could help........