A Word After Dying — Ann Granger 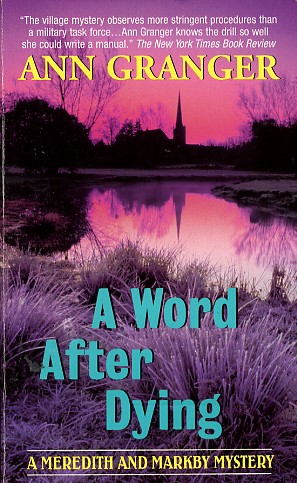 Inspector Alan Markby and his long-time friend Meredith Mitchell have taken a cottage in the country for a much needed holiday. But no sooner are they relaxing with a neighbor over a glass of blackberry wine, when Markby is being badgered for an "off the record" opinion about a somewhat suspicious accidental death.

Retired journalist Wynne Carter has been satisfying her professional curiosity by investigating a former villager: Olivia Smeaton, a reserved old lady with a racy past whose life--and recent fatal fall--leave a lot of questions unanswered. Determinedly off duty, Markby grumbles that the woman's death was probably caused by a loose slipper sole. Still, Meredith's interest is piqued by suggestive acts of vandalism that have been striking the village, including the malicious poisoning of the victim's much-loved pony. And, when another body is found, even Markby must admit that there is foul play afoot. With the villagers becoming increasingly unfriendly, and the mysterious violence continuing, Meredith and Markby begin to fear that Olivia's death may have been just the first of many, unless the two of them can make sense of the scandalous secrets so carefully hidden by the inhabitants of the seemingly peaceful Cotswold village.
Reviews from Goodreads.com