A Vow of Fidelity — Veronica Black 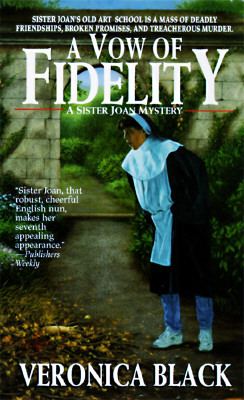 Share:
Long before entering the Order of the Daughters of Compassion, Sister Joan made a pact with her art school classmates. Was it coincidence or fate that led them to set a tomb--Elizabeth the First's in Westminster Abbey--as their meeting place? -- Twenty years later, Sister Joan receives a group photo as a reminder of the pact, with no accompanying note. And Mother Dorothy wants her to go to the London reunion, if only to draw recruits into her latest money-raising scheme.

The meeting itself is a success, but if some of Joan's classmates are surprised to find a nun in their midst, Joan is nothing short of stunned to learn that three of the original ten have died in terrible accidents. And when another copy of the photo arrives with the dead crossed out and an ominous black circle around Sister Joan, our pious sleuth knows it's no halo.

Her fine investigative instincts and her devotion to the Lord bring Sister Joan to the verge of a complicated and shocking discovery, and give our favorite nosy nun a chance to stop the next unwished-for martyrdom.