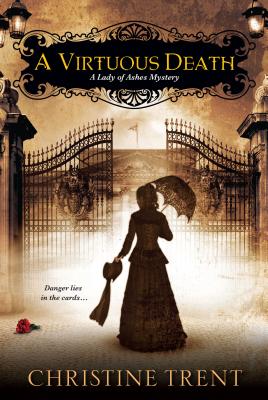 Share:
Queen Victoria, still mourning her long-dead husband Prince Albert, has found solace in John Brown, an enigmatic palace servant who dabbles in the occult and keeps the grieving queen entertained with his tarot card readings. Undertaker Violet Harper is invited to attend one of Mr. Brown's infamous readings, during which he implies that Buckingham Palace will soon be shrouded in death's dark veil. Well acquainted with death, Violet shrugs him off as a charlatan--until his sinister divinations begin to prove true. . .

Violet wonders if something foul is in the cards when the aristocratic young friends of the queen's daughter begin to die under mysterious circumstances. Her suspicions only grow when one of London's "moralists," a group bent on repealing the law that forces prostitutes into hospitals, suffers a similar fate. The deaths merely buttress the queen's enthusiasm for Mr. Brown's ominous talents, and, concerned by the fortuneteller's influence, Violet races against time to unearth the truth before the killer strikes again. But as she closes in on a murderer with an unearthly motive, Violet realizes she may be digging her own grave. . .

By turns heartwrenching and hopeful, A Virtuous Death is a gripping tale of fortitude besieged by vengeance inside the extraordinary world of Queen Victoria's court.