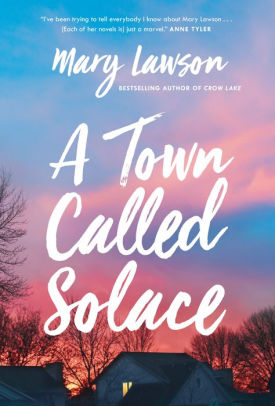 Share:
NATIONAL BESTSELLERNew York Times bestselling author Mary Lawson, acclaimed for digging into the wilderness of the human heart, is back after almost a decade with a fresh and timely novel that is different in subject but just as emotional and atmospheric as her beloved earlier work.A Town Called Solace—the brilliant and emotionally radiant new novel from Mary Lawson, her first in nearly a decade—opens on a family in crisis: rebellious teenager Rose been missing for weeks with no word, and Rose's younger sister, the feisty and fierce Clara, keeps a daily vigil at the living-room window, hoping for her sibling's return.Enter thirtyish Liam Kane, newly divorced, newly unemployed, newly arrived in this small northern town, where he promptly moves into the house next door—watched suspiciously by astonished and dismayed Clara, whose elderly friend, Mrs. Orchard, owns that home. Around the time of Rose's disappearance, Mrs. Orchard was sent for a short stay in hospital, and Clara promised to keep an eye on the house and its remaining occupant, Mrs. Orchard's cat, Moses. As the novel unfolds, so does the mystery of what has transpired between Mrs Orchard and the newly arrived stranger.Told through three distinct, compelling points of view—Clara's, Mrs. Orchard's, and Liam Kane's—the novel cuts back and forth among these unforgettable characters to uncover the layers of grief, remorse, and love that connect families, both the ones we're born into and the ones we choose. A Town Called Solace is a masterful, suspenseful and deeply humane novel by one of our great storytellers.