A Touch of Scandal — Anthea Malcolm 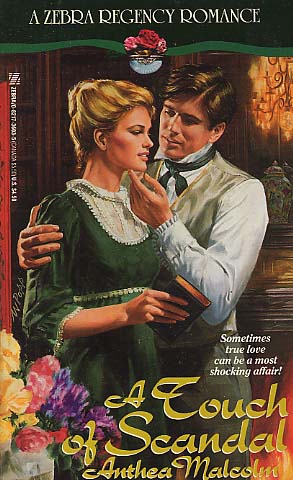 
Sometimes true love can be a shocking affair!

A DISHONORED GENTLEMAN
Once a brilliant government figure, Viscount Gideon Came had fled England amid scandal and betrayal. Determined to rebuild his life, he returned at last to find his once-successful firm suspiciously on the verge of ruin. An alliance with Fiona Alastair -- the very lady he'd wounded most grievously years before -- was his only hope. The ever-gracious Fiona agreed to be of help on one condition: that the end of their enterprise bring an end to their relationship. But this promise proved more easily made than kept, for Gideon soon found himself ensnared by the lady's enchanting beauty... and devilishly tempted to put honor aside in favor of passion!

A SCANDALOUS LADY
Only a fool would lose her heart twice to a rake like Gideon Came. Already disgraced once at the hands of the handsome lord Fiona had no intention of repeating her mistake. But as she and Gideon began their dangerous investigation into his business affairs, there was no denying the feelings that once again flared between them. And as she gazed into Gideon 's demanding dark eyes, Fiona realized with a start that even the best of intentions could lead to the most shocking of conclusions!