A Touch of Mortality — Ann Granger 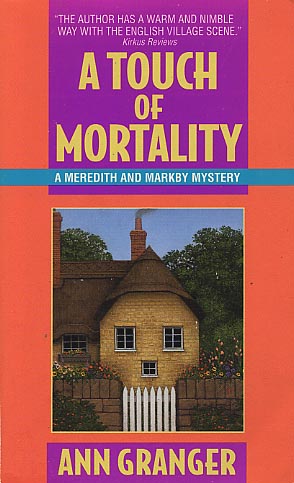 Meredith Mitchell's old friend, Sally Caswell, and her scientist husband Liam have moved from London to quiet, rural Oxfordshire, hoping they might enjoy a more peaceful atmosphere where Liam could concentrate on his latest project. But the old duplex is shared with an elderly village eccentric who keeps goats in the backyard and irritates an already irritable Liam. Morose and frustrated by a project that is not going well, Liam argues with his crotchety neighbor, vents his anger on his wife Sally, and antagonizes everyone he meets. Then a mysterious package arrives.

The explosion from the letter bomb almost kills Sally, and it is suspected that Liam has been targeted by animal rights activists for his research. Inspector Markby's not so sure. Neither is Meredith. She suspects her friend Sally isn't well. But the next message leaves no doubt that even in the quiet Cotswold village there lurks a touch of malice, mystery...and murder--and that Meredith and Markby have another puzzling case on their hands.