A Thing of Beauty — Casey Claybourne 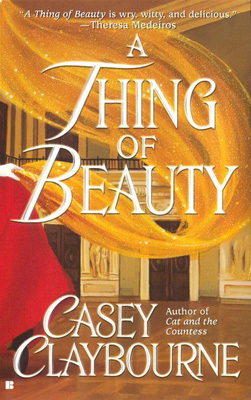 Belinda Croft had never been accepted into high society--having sacrificed fashion and frivolity for science and education. When Sissy, her birdbrained cousin, appears before the first big ball of the season with a blemish, Belinda applies a simple remedy. Sissy's debut is a success--and word of her bluestocking cousin's new face cream spreads like wildfire.

As London's upper crust seeks out her secret recipe, Belinda becomes a valuable commodity--sought after by the mysterious and handsome Marcus Barrow, arbiter of taste to the haute monde. She melts in rapture under his hot gaze--a gaze that sees beneath Belinda's plain wrapping to the dazzling woman inside. But when Sissy questions Marcus's true motive, Belinda must discover whether their love is more than just skin deep... .
Reviews from Goodreads.com