A Taste for Nightshade — Martine Bailey 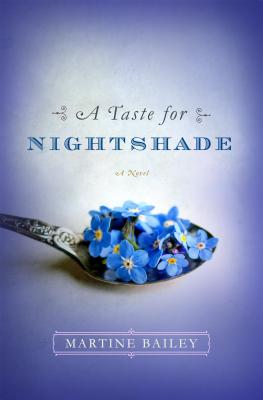 Manchester 1787. When budding young criminal Mary Jebb swindles Michael Croxon's brother with a blank pound note, he chases her into the night and sets in motion a train of sinister events. Condemned to seven years of transportation to Australia, Mary sends him a 'Penny Heart'-a token of her vow of revenge.

Two years later, Michael marries naïve young Grace Moore. Although initially overjoyed at the union, Grace quickly realizes that her husband is more interested in her fortune than her company. Lonely and desperate for companionship, she turns to her new cook to help mend her ailing marriage. But Mary Jebb, shipwrecked, maltreated, and recently hired, has different plans for the unsuspecting owners of Delafosse Hall.

A Taste for Nightshade is a thrilling historical novel that combines recipes, mystery and a dark struggle between two desperate women, sure to appeal to fans of Sarah Waters and Carolly Erickson.
Reviews from Goodreads.com