A Song for You — Betsy Thornton 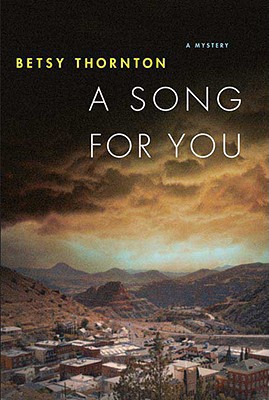 In A Song for You, Betsy Thornton returns to her dynamic character Chloe Newcombe, victim advocate at the Cochise County Attorney's Office.

A heavy storm hits Dudley, Arizona, wreaking havoc. A local woman drowns in a flash flood. A heavy drinker falls into the draining system and is finally found a few days later. The Barnetts, who moved into town six months ago, are unhappy to learn that a retaining wall on their property will need immediate fixing. And they're even more dismayed when the workers' digging unearths a dead body.

The man's body has obviously been there a long time. When Rachel Macabee reads about it in the local paper, she is convinced that the dead man was a member of the band that her mom sang with when Rachel was a little girl. He had disappeared just a few days before her mother was killed. The band members assumed that he had left in search of a better job, but Rachel had never believed that---and now she knows she was right.

She doesn't trust the police---they were wrong the first time. So she approaches private detective Brian Flynn, a former police officer as well as Chloe Newcombe's former lover. He agrees to try to discover what really happened. And after all these years, Rachel may finally find her mother's killer.

Betsy Thornton pens the stories about the inhabitants of this very real-life mountain town with great style. A Song for You promises more atmosphere, likable characters, and another entertaining puzzle.
Reviews from Goodreads.com