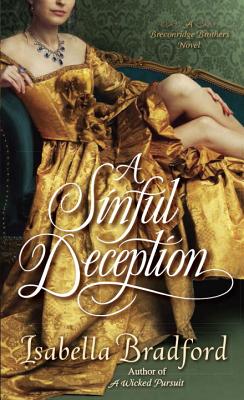 In the second book of Isabella Bradford's captivating new trilogy featuring London's most scandalous trio of brothers, Geoffrey Fitzroy takes center stage and discovers just how fast a rogue can lose his heart . . . and to a lady who hides a stunning secret.

Lord Geoffrey Fitzroy leads a charmed existence. As the second son of the Duke of Breconridge, he has none of the responsibilities of his older brother and all of the advantages, leaving handsome Geoffrey free to enjoy his rakish pursuits. And pursue them he does, leaving hearts fluttering all over London. But one night, at a ball brimming with high society's most sought-after beauties, only one truly intrigues him: the regal, aloof, and mysterious Miss Serena Carew.

Magnificently dressed and wearing jewels befitting a queen, the lady is considered the prize of the season: a noble-born heiress raised in India. But even as Geoffrey's fascination grows, Serena deflects his curiosity -- and with good reason. Serena's exotic past contains a perilous secret that could destroy her. Yet her plan to live in safe solitude is thwarted by her hungry heart, and soon Geoffrey's passionate seduction finds her blissfully bedded -- and wed. Will her deception destroy her chance at happiness as Geoffrey's wife? Or will the devotion of her new husband bring out the hidden truth of her undying love?
Reviews from Goodreads.com